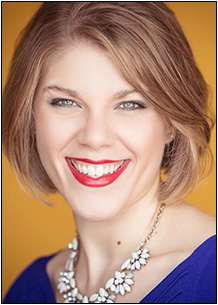 Other past roles include Frasquita (Carmen) with Opera on the James, and Vitellia (La Clemenza di Tito) (2016) with New York Opera Forum. A 2014 Young Artist with Opera North, Audra has also participated in the CoOPERAtive Program as a Fellow in 2013 and a Young Artist in 2011.

She is the 2013 winner of the graduate-level Westminster Voice Awards, as well as a semi-finalist in the 2013 Classical Singer National Competition. Audra received her BM in Vocal Performance from Kent State University.